While some paladins preferring a straight black-and-white choice revere Tyr, he is most popular with the bureaucrats, judges, and merchants who make the entire system move efficiently. Worshipers of Tyr see the world in clear-cut moral terms; they like to see Faerun firmly cleansed and ordered by laws that are evenly and diligently applied. They are not very tolerant of other world views and do not find parody, mockery, or even questions about their faith amusing. Tyr survives very well in the civilized world, and most of his temples are in larger cities. He is also worshiped on the Rock of Bral, rumored to be one of the Tears of Selune.

Tyr had no specialty priests for over 10 years after the Time of Troubles. Sages theorize that he wished to favor none of his clergy members over the others. Recently, all clerics of Tyr received a stern vision from their god in which he stated that he had seen that other faiths were mocking the hard way of justice with theit divinely granted special favors and that the Tyrran church had served nobly and struggled valiantly against the weight of such odds. In reward for their perseverance under such conditions, Tyr declared that henceforth all clergy of Tyr would have special powers to aid them in their enforcement of justice. All priests of Tyr are therefore specialty priests after the Feast of the Moon in 1369 DR.

The Church of Tyr is a highly organized, formal priesthood that maintains internal rules and a system of fortified temples. At Tyrran temples, the faithful can find lodging, fresh mounts, healing, spell aid, weapons, gear, and holy advice. If a worshiper or priest knows that she or he has stinted in service to the Just One, confession and penance are also available.

Level titles used by the clergy in recent years, in order of ascending rank, are:

Maverick titles are few indeed, as this is a closely regulated priesthood.

Novices of Tyr are charged to: "Reveal the truth, punish the guilty, right the wrong, and be always true and just in your actions." Tyr and his followers are devoted to the cause of justice, to the righting of wrongs and the deliverance of just vengeance. This is not necessarily equality or fairness, as some make the maimed god out to represent, but rather the discovery of truth and the punishment of the guilty. Tyrrans tend to be stiff-necked about theology and to see matters in black and white terms.

Clergy of Tyr are sworn to uphold the law wherever they go, and to punish those wronged under the law. They are to keep complete records of their own rulings, deeds, and decisions. Through these records, a priest's errors can be corrected, his or her grasp of the laws of all lands can grow and flourish, and lawbreakers can be identified by others. No known injustice done by a Tyrran priest must go unbalanced. Priests of Tyr should also always be vigilant in their observations and anticipations, seeking to see what forces and which beings intend or will cause injustices and threaten law and order in the future. They should then act to prevent such challenges to justice in coming to pass. In short: Abide by the laws, and let no others break them. Mete out punishment where lawbreaking occurs.

Priests of Tyr serve as judge, jury, and executioner in wilderness areas where there is no law but that of the sword. When doing so, their code cleaves fairly close to "an eye for an eye, a tooth for a tooth," but does adhere to common trade custom leavened by "the mercy of ignorance." This last means that if a being is truly ignorant of the proper behavior, minor transgressions can be forgiven once with a warning, an explanation of the proper law—and a record of the warning being written down in the priest's Book of Lawgiving for later distribution to other Tyrrans so that the particular being will not be forgiven a second time.

In civilized areas, Tyrrans (inevitably called "tyrants" behind their backs by nonbelievers) become legal experts and serve as the lawyers of Faerun by dispensing advice and "speaking for" accused persons in trials. The fees they charge go to the Church of Tyr.

Tyrrans often go about lecturing others on their shortcomings as to following laws, rules, and regulations, but they also serve to fearlessly take complaints about such formalities to the authorities who make such rules. No Tyrran will enforce a law that contradicts other laws or can be shown to be unjust. Note the concern is not that it is unfair, but unjust—defined in the Tyrran church as out of compliance with the principles and definitions adhered to by other laws in the body of legal doctrine of which it is a part. Priests of Tyr also have the duty of delivering just vengeance as punishment on the part of those who cannot do it themselves. Tyrrans undertake formal missions to do this, making promises to those to be avenged and forcing open confrontations with those the vengeance is to be visited upon, rather than working behind the scenes or employing intrigue.

The priesthood of Tyr follows a monthly cycle of high rituals, beginning with Seeing Justice on the first day of each month, the Maiming on the thirteenth day of the month, and the Blinding on the twenty-second day of each month. These major rituals involve chanted prayers, thunderously sung hymns to the god, and conjured illusions: a gigantic war hammer that glows blinding white hanging over the heads of the congregation at Seeing Justice; at the Maiming, a gigantic right hand that bursts into view above the congregation surrounded by a nimbus of burning blood, then tumbles away into darkness and fades from view; and two eyes that burst into fountains of flaming tears until they have entirely spilled away and are gone at the Blinding. Early in the ceremony of the Blinding, symbolic blindfolds of diaphanous damask are bound over the eyes of the celebrants by clergy to remind the worshipers of Tyr's blindness.

In addition to the high rituals, Tyrrans celebrate daily rituals of prayer to the god, which take the form of a sung invocation, a series of responsive prayers led by a senior cleric, a short sermon of instruction or reading of wisdom from the Sacred Judgments of Tyr, and a rousing closing anthem.

In temples and abbeys dedicated to the god, such rituals are celebrated every two hours around the clock, with the most important offices taking place at dawn, highsun (noon), the equivalent of six o'clock, and the equivalent of nine o'clock. The dawn ritual, The Awakening, is a gentle, uplifting renewal of faith. The noonday ritual, the Hammer at Highsun, is a stirring, exultant expression of the church's vigilance and martial might.

The evenfeast ritual, High Justice, is a stern, proud celebration of Tyr's commandments and the church's purpose. The evening ritual, the Remembrance of the Just Fallen, is a haunting, softly chanted reverence for those who have laid down their lives for justice, both inside and outside the faith—a ritual of quiet dignity and respect that always leaves many witnesses, even those who do not follow Tyr, in tears.

The Fortress Faithful in Tethyr, south of Zazesspur, is probably the most important temple of Tyr at the moment, as clergy of the Just God are converging on it to help restore law and order to war-torn Tethyr. They work in large, well-armed patrols sent out of the castle-abbey.

More holy, older, and supreme in the well-ordered hierarchy of the church of Tyr, however, is the House of Tyr's Hand in Milvarune, in Thesk. The House is the home of the Just Knights, heavy cavalry whose gleaming armor and lowered lances are the last sights many an invading warrior of Thay has seen. Some sages have called this superb army "the Simbul's least likely yet staunchest allies" because of their efficiency in hurling back Thayan armies over the years.

Also of note is the one known Tyrran temple in Realmspace not on the surface of Abeir-Toril. The Tyrran church on Bral (one of the Tears of Selune) is known as the Pantheist Temple of Tyr. Its clergy and ceremonies conform to the standards of the Torilian faith, but its priests worship Tyr as a warrior god as well one of justice. They consider Tyr the patron of all good warriors. Pantheistic priests of Tyr recognize any lawful good deity of justice or war as an avatar of their deity and often gain access to spells in many crystal spheres that do not know Tyr by that name. As a deity of justice, Tyr is not very popular in Bral, which is known as a pirate haven. The priests of the temple feel obligated to take on crime and injustice wherever they find it, and this has led to several small, crusading wars. Priests of Tyr and lawful good warriors from any crystal sphere find a warm welcome at the Pantheist Temple of Tyr, although they may have a hard time adjusting to the idea promoted here that Tyr goes by different names in different places.

The church of Tyr has many affiliated knightly orders. Individual temples often have special orders or companies attached to them or supported by them, such as the Just Knights of the House of Tyr's Hand in Milvarune, mentioned above. Two church-sponsored orders of paladins are the Knights of Holy Judgment and the Knights of the Merciful Sword. The first order tends to attract those who emphasize the "lawful" in their alignment, and the second the "good." Knights from either order may join an elite order of paladins (of 7th or greater experience level) known as the Hammers of Grimjaws.

To join the Hammers, a paladin must be nominated by a member of the Hammers, and his or her nomination must be seconded by a senior priest of Tyr. If both these requirements are met, she or he must stand vigil in the holy sanctuary of a temple of Tyr all night. If the paladin is judged worthy by Tyr, Tyr sends the paladin a vision of his war hammer. If no vision appears, the paladin is deemed yet too inexperienced, but not a failure, and may be nominated again after some time has passed. If Tyr sends a vision of his sword, the paladin has knowingly or unknowingly failed Tyr in some way and must immediately complete a quest to atone. If the quest is completed, Tyr is pleased and forgives, and the knight is admitted into the Hammers. There is no quitting a quest under these conditions; either the paladin succeeds or dies trying.

The Knights of Samular and Order of the Gauntlet are also strongly allied with the church.

The vestments of Tyr are blue and purple robes with a white sash. A white glove or gauntlet is worn on the left hand and a black one on the right to symbolize the loss of the god's right hand.

For everyday use, most priests of Tyr wear armor or practical clothing adorned on the shoulders and back with the symbol of the hammer and scales of Tyr.

The Church of Tyr 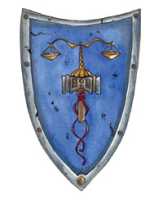 The Holy Symbol of Tyr

The Church of Tyr was the religious organization dedicated to worshiping, as well as furthering the influence of the deity, Tyr.

Like other worshipers of Tyr, members of the Church of Tyr favor the following items: Balance of Belaros, Hammer of Tyr, Longsword, Ring of Might, Sacred Judgments of Tyr and Warhammer

Depictions of Church of Tyr 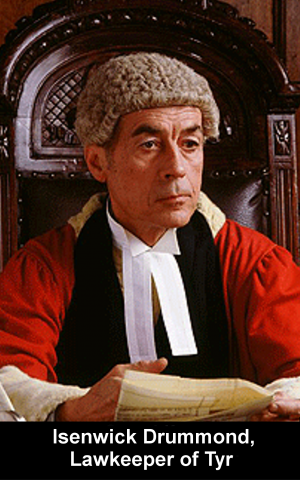 All Worshipers of Tyr