Aside from a handful of scattered temples, the church of Hoar is composed primarily of lone wanderers who travel the realms, agreeing to pray for Hoar's aid on behalf of those who seek or fear vengeance, in exchange for a small fee. Charlatans who would try to scam people in this manner quickly feel the punishment of Hoar.

His followers seek out victims of injustice, hear and appraise their stories, and track down the perpetrators in order to inflict a fitting form of punishment. No injustice is too small or too large for revenge to be sought and a fitting punishment meted out, earning the church of Hoar the ire of town watches and Tyrists alike as well as the adulation of the downtrodden.

The Church of Hoar 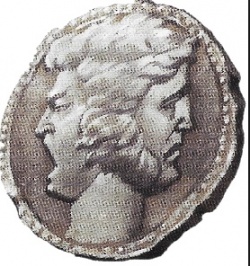 The Holy Symbol of Hoar

The Church of Hoar was the religious organization dedicated to worshiping, as well as furthering the influence of the deity, Hoar.

They can sometimes be found in the temples of Hoar: Amphitheater of the First Thunder, Hidden Hand of Fate and Thunderous Hand of Vengeance.

Like other worshipers of Hoar, members of the Church of Hoar favor the following items: Javelin

Churches of the Allies of Hoar: Church of Shevarash

Churches of the Enemies of Hoar: Church of Anhur

Depictions of Church of Hoar

All Worshipers of Hoar

No Campaign Appearances found for Church of Hoar

Active in: Amphitheater of the First Thunder, Hidden Hand of Fate and Thunderous Hand of Vengeance

No known history for Church of Hoar

Retrieved from "http://realms.dndpedia.com/index.php?title=Church_of_Hoar&oldid=205411"
Categories:
... more about "Church of Hoar"
RDF feed
Active in
Amphitheater of the First Thunder +, Hidden Hand of Fate +  and Thunderous Hand of Vengeance +
Ally of
Church of Shevarash +
Enemy of
Church of Tyr +  and Church of Anhur +
Favors
Javelin +
Membership
Fighter +, Rogue +, Church of Hoar +  and High Fatemaster +
Organization Type
Religious +
Portrait