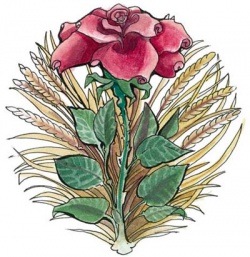 The Holy Symbol of Chauntea

Chauntea's priests tend to be folk of all races who have a deep love for the land and an appreciation of natural ways and balances, seeing humans and other intelligent life as part of an ongoing series of cycles. They tend to be gardeners or farmers by trade and training and have an increasing appreciation for the beauty of plants that brings them at last to the veneration of She Who Shapes All.

Chauntea is spoken of as "Our Mother" or "the Mother of All" by her clergy. They know that she is very powerful in a quiet way—and like her, they tend to be quiet and patient in their ways. Many members of her clergy are female. In the communities in which they dwell, they are known for their wisdom and appreciated for their willingness to freely (without fee or obligation) tie up their skirts and pitch in when agricultural work must be done, especially where farmers are ill or injured.

Though Chauntea's faith has some large, impressive temples and shrines whose granaries ensure that food for all is abundant in their vicinities, the backbone of the Earthmother's faith is composed of small, local temples. Often these are seed-storage caverns near pure wells. Chauntean services are also held in open fields and druid groves.

Chauntea's church has two wings: standard clerics who minister to the faithful in towns, cities, and civilized areas, and druids who work in more outlying regions. With the success of the town priests, the druids have been moving farther and farther afield. The relationship between the druids, who call themselves "True Clerics of Chauntea," and the more civilized clerics is cordial, but at times strained. The druids have always venerated Chauntea, and consider the more recent city disciples to be upstarts. The more civilized priests, in turn, feel that the druids' day is done, and while druids are still useful in wild lands, the rising nations need and organized, professional faith controlled by a more reasonable and rational clergy. The percentage breakdown of clerics and druids in the clergy is about 40% clerics and 50% druids. Mystics and shamans, who work alone outside of either wing of the church and report only to She Who Shapes All herself, comprise only 5% of the priesthood together, and monks, who are always allied to a particular temple or druidic circle's leader, round out the remaining 5%.

Chauntea's faith is one of nurture and growth. Agricultural sayings and farming parables dot her teachings. Growing and reaping, the eternal cycle, is a common thread in Chauntea's faith. Destruction for its own sake, or leveling without rebuilding, is anathema to the church. Chauntean priests are charged to nurture, tend, and plant whenever and wherever possible; protect trees and plants, and save their seeds to that what is destroyed can be replaced; see to the fertility of the earth, but let the human womb see to its own; and to eschew fire.

Priests of Chauntea are charged to learn—and pass on to others, both fellow clergy and laity—all they can of horticulture, herblore, plant types, and plant diseases, and to encourage all civilized folk to enrich the land by replanting, composting, and irrigation, not merely to graze or dig it bare for what it can yield and then pass on. They replant trees wherever they go, root out weeds that strangle and choke crop plants, and till plants back into the soil. They strive to let no day pass in which they have no helped a living thing to flourish.

Clergy of Chauntea are encouraged to work against plant disease wherever they go. They often hire nonbelievers to helf them burn diseased plants or the corpses of plague-ridden livestock to prevent the spread of sickness. They keep careful watch over such blazes. Chauntean clerics do not like handling fire but are not forbidden to use nonmagical fire.

Chauntea encourages her faithful to make offerings of food to strangers and those in need, freely sharing the bounty of the land. It is also said that money given to one of her temples returns to the giver tenfold. Worshipers should plant at least one seed or small plant-cutting a tenday, tend to it faithfully for as long as possible, and see that their own wastes are always tilled back into the soil to feed later life. Any extra seeds yielded by plantlings should be taken to a temple of the goddess for distribution to the less fortunate.

Every day should begin with whispered thanks to Chauntea for continued life and close with a prayer to the setting sun, from whence (Chaunteans believe) the Great Mother sends her power. Prayer to the Great Mother must be made whenever things are planed, but should otherwise occur when worshipers are moved to do so by the beauty of nature around them, which they are always encouraged to notice. Prayer to the Golden Goddess is best made on freshly tilled ground, farmland, or a garden, or failing that, at least at a well or a watering place. Chauntea listens best to those who enrich the ground, so before prayer many priests bury wastes, dispose of the litter of civilization, or plant seeds.

Few ceremonies of worship fall at set times. Passing one's wedding night in a freshly tilled field is held by Chaunteans to ensure fertility in marriage. Greengrass is a fertility festival, wherein uninhibited behavior and consumption of food and drink is encouraged. The much more solemn High Prayers of the Harvest celebrate the bounty Chauntea has given a community and are held at different times in each community to coincide with the actual harvest of crops, rather than precisely on Higharvestide.

Goldenfields, a vast, walled abbey and farm compound east and north of Waterdeep, is the current pride of Chauntea. The goddess is said to be delighted at the community of more than 5,000 worshipers who till over 20 square miles of contiguous land and outlying buildings on the banks of the Dessarin. The largest and most energetic project undertaken by the faithful of Chauntea, it has become the Granary of the North.

Goldenfields supplanted the older Harvest House in central Amn as the most important center of Chauntean worship, but the ornate formal gardens of the all-female Sisters of the House remain unmatched in the known Realms. However, this smaller temple of Chauntea is being challenged even for its second-place ranking by the smaller but almost perfectly appointed Abbey of the Golden Sheaf in Mistledale, which serves the dale around it with admirable skill and diligence.

While by no means defenseless, the church of Chauntea has no affiliated military or knightly orders. Those who guard its temples and shrines are usually members of the clergy.

Priests of high rank of all types in the service of Chauntea tend to favor white or sun-colored ceremonial robes trimmed in deep forest green and to use staves smoothed by much handling but otherwise natural in appearance. Some such staves are enchanted to purify or promote the growth of what they touch.

Chauntea's clerics, monks, and shamans dress simply and without pretense most of the time. They favor earth tones of green and brown. The druids prefer simple brown robes with high rank denoted only by a belt laced with gold thread or some other similar, precious decoration. The citified clerics, on the other hand, wear and open-fronted brown cloak with more standard garments, like tunic and trousers, underneath. Mystics dress in everyday clothes or robes of more colorful garb in brighter green, yellow, rust, and brown earth tones.

The Church of Chauntea

The Holy Symbol of Chauntea

The Church of Chauntea was the religious organization dedicated to worshiping, as well as furthering the influence of the deity, Chauntea.

Like other worshipers of Chauntea, members of the Church of Chauntea favor the following items: Carnelian citrine and peridot floral brooch, Rose and Scythe

Depictions of Church of Chauntea 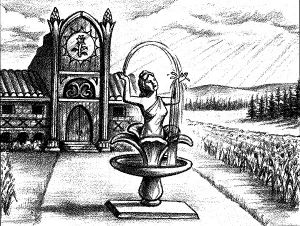 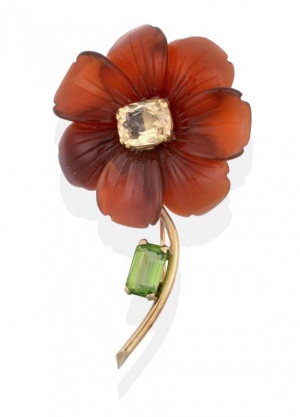 All Worshipers of Chauntea

No Campaign Appearances found for Church of Chauntea