Priests of Anhur are obliged to defend the territory of Mulhorand, out to its historic boundaries. They are to smite the enemies of the realm, and keep its people, highborn or slave, safe from evil.

The position of priest in the church of Anhur is hereditary; members belong to the House of Ramathant, and can claim at least one divine incarnation of Anhur among their ancestors. Anhur's clergy is composed entirely of humans native to Mulhorand.

Temples to Anhur are solidly built structures design to repel invaders. They are continuously stocked with equipment and provisions in the event they are besieged.

The center of power of the church of Anhur is located in Sultim, the location of the Blood Fortress. Worship of the Falcon of War is strongest in Mulhorand, but temples dedicated to Anhur can also be found in Unther and Chessenta.

Martial skills are an important factor in the lives of the clergy and followers of the Church of Anhur. These clerics spend much of their time preparing for battle, as well as training the soldiers of Mulhorand. They focus on executing daring maneuvers and plans in the hopes of increasing the glory of their nation. Divine spell casters devoted to Anhur pray for their spells at dawn.

Typical garb for Anhur's clergy includes a breastplate and collar, shaped in the figure of a lion for high-ranking priests, as well as a white linen skirt known as a kalasiris and sandals laced to knee height. A headdress and collar are also common. These priests often dye the skin red to emulate their deity and typically shave their heads. A set of three blue circles painted on their forehead serves as a symbol of their calling. They often tattoo themselves to commemorate personal achievements and victories. The quality of a priest's clothing reflects that individual's power and standing. When preparing for combat followers of Anhur favor scale mail or lamellar mail, but will also readily select the best equipment for the situation.

Informal organizations are common among the followers of Anhur, especially with those that serve in the nation's military.

Guardians of Skuld
Formed since the Time of Troubles and led by the church of Anhur, this organization counts followers of Anhur, Osiris, and Isis among its members.

Order of the Watchful Lion
This organization serves as Mulhorand's first line of defense. Its members often scout neighboring regions and report important events, areas, and people to their superiors.

The Church of Anhur 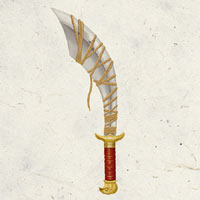 The Holy Symbol of Anhur

The Church of Anhur was the religious organization dedicated to worshiping, as well as furthering the influence of the deity, Anhur.

They can sometimes be found in the temples of Anhur: Blood Fortress.

Like other worshipers of Anhur, members of the Church of Anhur favor the following items: Breastplate, Falchion, Lance, Linen, Scale mail and Tattoo

Depictions of Church of Anhur

No depictions of Church of Anhur found.

All Worshipers of Anhur

No Campaign Appearances found for Church of Anhur

No events are known to involve Church of Anhur