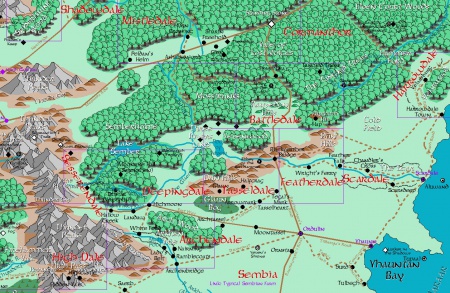 Archendale takes the form of a long, narrow valley, Arkhen Vale. It surrounds the gorge cut by the swift, cold River Arkhen. The gorge begins where the river cascades down out of the mountains at Arkhen Falls (a spectacular sight) and proceeds along the river's southeasterly run between the Thunder Peaks and the Arch Wood. The valley flanks the gorge and spreads out a day's ride in all directions from the Dale's only town, Archenbridge.

Before the Dale grew prosperous, the lower end of Arkhen Vale was all farms, and the upper end was rocky and largely deserted sheep grazing land. Today, few trees are to be found below Arch Pool, a small pond where the river waters spill down a few rapids and the crowded homes, gardens, and shops of the Arkhenfolk begin. Most farms in the Dale today are little more than large private gardens. Almost all the Dalesfolk make their living at some sort of skilled craft, from gemcutting to woodcarving, or as the wealthiest folk in Sembia do: through investments.

The waters of Arch Pool are open to all, and visitors are encouraged to water their mounts and camp on its upper shore. Caravans and people coming to trade in Archenbridge must rent paddock space and accommodations in Archenbridge, however. No visitors are allowed to settle or build any structures above Arch Pool, and the only buildings above the pond are farmers' cottages, several hilltop strongholds used by the Ridesmen (and usually occupied by bored sentries keeping watch for grass fires and monsters on the prowl), and the walled village of White Ford.

The Arkhen gorge is steep-sided. Although a few foot tracks wind up its slippery rock walls into Arch Wood and the mountains, the only trails into or out of the valley that a mounted man or a wagon can traverse are at Archenbridge and White Ford. Good roads run along both sides of the banks of the Arkhen for most of the length of the Vale. Save where people have built or tilled, the valley floor of the upper Vale is a misty area of ferns, mosses, shrubs, and small waterfalls that bring the many springs that rise from the sides of the valley down from pool to pool to join the river. The half-elven minstrel Thalaeva Rynthar of Elventree called the upper reaches of Archendale "perhaps the most beautiful landscape east of Evereska - much too good for those greedy, churlish Arkhenfolk."

The largest and most beautiful waterfall in all the Dales is Arkhen Falls. Here a spring bursts from the top of Mount Thalagbror (a peak named for a long-dead ogre mage who once dwelt in a cave somewhere on its eastern flank) and crashes for hundreds of feet down the always-wet mountainside to begin its 60- mile run to Archenbridge. Legend insists that pegasi dance and frolic around the falling water.

On either side of Arkhen Vale stand what some elder Arkhenfolk call "the Walls of Night" because they block the early rays of the morning sun and hasten the gloom of night: Arch Wood and the Marching Mountains. Few folk in present-day Archendale know the mountain trails or have ever ventured up into their monster-haunted height, and almost as few have ever entered the dense forest that forms the other flank of Archendale. The Arch Wood is a dark, thick wall of shadowtop, duskwood, ash, oak, and elm trees haunted by owlbears and bearing a fell reputation. Old elven ruins and rumored mage tombs lie within the dense woods, but those who go looking for them rarely come out again. If the planned cutting of timber in Arch Wood proceeds as briskly as some Arkhenfolk desire, some of these lost sites will be cut out of the forest into the easy reach of all.

Below Arch Pool, the well-ordered countryside presents a vista of gently slop- ing tilled fields divided by hedgerows that have grown up around rows of heaped stones. Children here learn to use their slings swiftly and surely when very young to bring down birds for use in hearth pies and to keep the avians from plundering seeds or crops. Their elders make sure that not a foot of ground is wasted.

Amid these neat and fertile farms stand the hamlets of Ladys Belt, Nairning, and Ramblecoats, places which offer farmers markets and farm supplies stores. All lodgings in these farmlands are safe, clean, and enjoyable, but there is little of particular interest to the outlander hereabouts except horses: Fine riding mounts are bred around Ladys Belt. All else can be had more cheaply in Archenbridge, where competition is fiercer. Most visitors to the farmlands of Archendale are passing through to White Ford and the lands beyond or are adventurers trying their luck in the mountain mines or in Arch Wood.

Of old, there was much copper and gem mining in the peaks above the gorge of the River Arkhen, especially around Arkhen Falls. Monsters have always made mining dangerous in the area, and yields from the delvings have grown more and more paltry with the passing years, so the miners have grown fewer among Arkhenfolk.

Outlander adventurers, however, have increased in the region since Sembia was founded, the elves grew quiet, and the roads opened up. Every year more and more folk visit Archendale in hopes of making their fortunes. They are drawn by tales of caches of elven finery and Sembian merchant treasuries hidden in the many natural caverns and abandoned delvings of the Marching Mountains by folk who did not live to return and claim them.

The most vivid stories of mining in Archendale center on the Sparkling Stones, caverns somewhere in the mountains above Arkhen Vale whose walls glitter with thousands of gems. These caves are said to be guarded by a clan of dwarves driven mad by the riches they guard. These dwarves supposedly seek to slay all intruders, but they may let some escape or even toss them fist-sized gemstones out of insane whimsy. Many folk claim to have seen these shining deeps and escaped through such dwarven folly. It is certain, however, that crag sheep, vultures, and wyverns lair in the high fastnesses of the Marching Mountains, and that hobgoblins and worse creatures sometimes raid miners and isolated holds in the upper Vale. 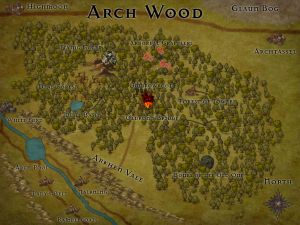 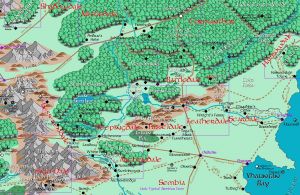 Arkhen Vale has not been a venue in any Campaigns

No inhabitants of Arkhen Vale found.

No known events for Arkhen Vale

No known history for Arkhen Vale